Founders of Chiropractic were vitalistic philosophers who understood that there is order in the universe, life is created, maintained and destroyed according to natural law, and that life is health. In the words of B.J. Palmer is know as the developer of Chiropractic:

Today, BABIES ARE CONCEIVED, developed, given birth, live, and die according to law––natural law, the law that has been here, is coming in will be.

At this junction, what is law?

Law is that which is fixed, stable, everlasting, eternal.

If law is violated itself just once, it would cease to be a law.

If law could violate itself once, it could do so million times.

And, the more violated violated itself, the less law it would be.

Law does not violate itself to please the caprices of man.

Law is too big to change its pattern to please… man.

Scientists TELL US that in “nature” there are two forces contending against each other, and that things are as they are because of action and reaction of these two forces.

These are called the centrifugal (or inside), and the centripetal (or outside), known in physics as attraction and repulsion.

These two forces work on human beings as they work on everything else.

In chiropractic, they are known as innate intelligence (centrifugal) and environment  (centripetal).

For thousands of years professionals that minister to the sick disregarded the centrifugal or inside force (Innate Intelligence), and searched the heavens and earth in a vain attempt to externally find the cause of disease.

Even now, we find a vast and learned army engaged in draining swamps, killing mosquitoes, prescribing diets, discovering germs and establishing hygienic conditions under which those in whom the flame of life burns feebly may continue longer upon the earth.

To contend that these investigations have found nothing of value to mankind is to betray ignorance and to show a total disregard for probable facts as to make ourselves ridiculous.

Fire burns, cold freezes, water drowns, alcohol intoxicates, poison kills, etc., and the most perfectly aligned spine in the world, with 100% of Innate Intelligence on the job, with a perfectly normal range of adaptability, will not prevent these excess outside conditions from producing death, discomfort, or loss of ease—at this stage of the development of the race, at least.

When these facts are admitted in environmental conditions, and each is traced to its logical conclusion, there remains the overwhelming mass of conditions of dis-ease that effect mankind, which are not reconciled to the external environmental theory of the cause of dis-ease.

A hundred thousand people drink water from the same stream for a year, and during that year forty become sick with what is diagnosed as typhoid fever.

Give the why of this from the standpoint of the water—or the germs in the water—being the cause.

Reverse the statistics and say that of a hundred thousand who drank the water, only forty remained alive.

Living under the same environmental conditions, one member of the family has heart trouble, another bronchial, a third liver, and a fourth stomach trouble; while a fifth may suffer from nervousness, six from sciatica, etc.

Like causes produce like results. If this be true, if this be natural, how can one who affirms that the cause of disease lives in environment reconcile the facts to that theory?

It is self-evident there is some factor which is not environmental, that accounts for different results.

Chiropractic teaches this unknown factor is found within, and that the resistance, or the susceptibility, of the individual must be measured in terms of centrifugal force, i.e., vitality or mental impulse

When performance of your activities of daily living are successful and within your ability to maintain good health, you have baseline fitness. Looking specifically at your joints, when you do your everyday lifting, bending, sitting, walking, running, pushing, pulling and throwing, do your joints remain stable? Are they already aligned or are they misaligned? If they are aligned, when you use them, do they remain aligned? How do you know if your joints are aligned in the first place? How do you know if you have healthy brain-to-nerve-to-muscle-to-joint feedback?

Of course you may come to see me and I’ll answer these questions for you. However, by using the following criteria, you should be able give yourself a fairly accurate assessment. 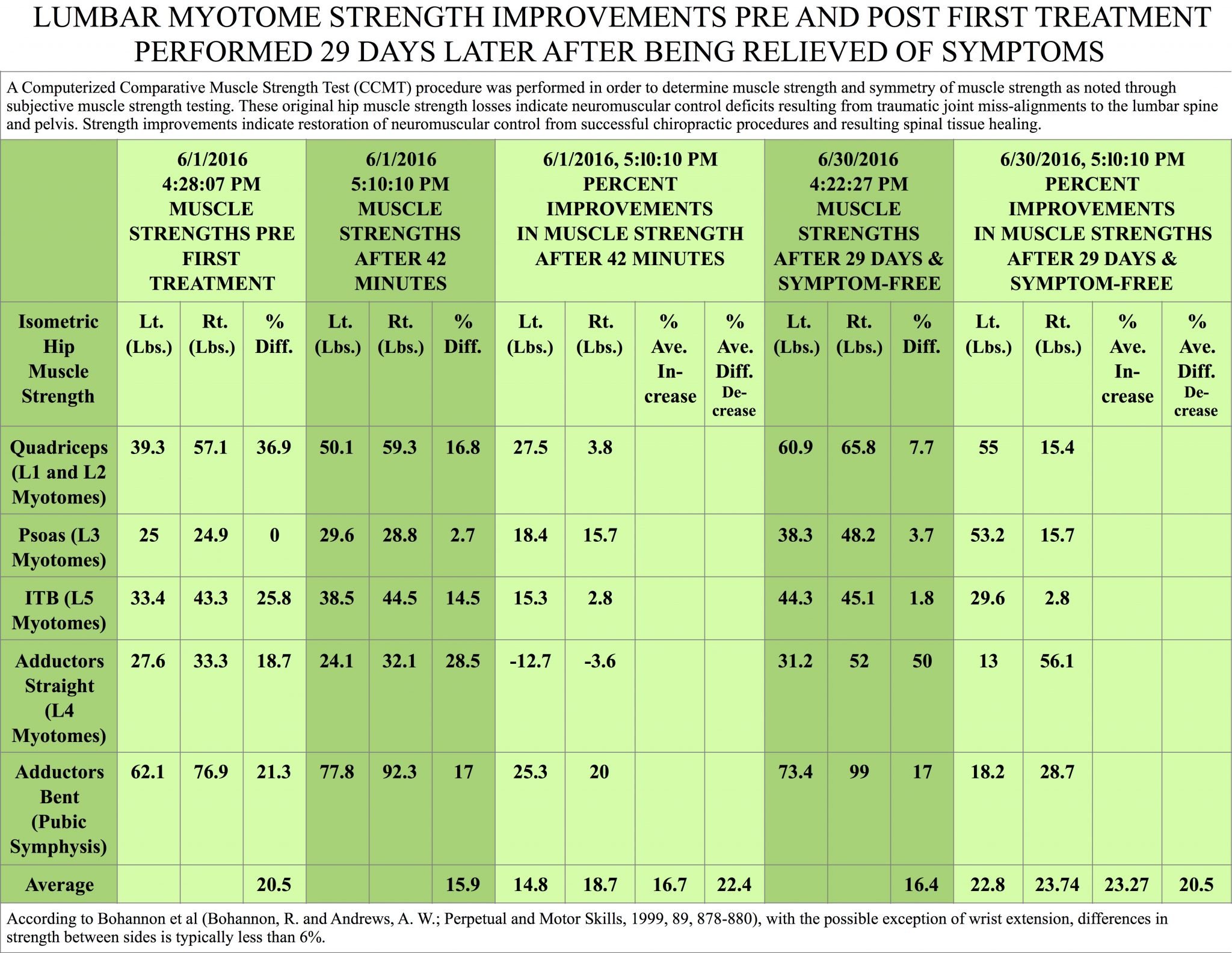 The hip muscle strength testing on 6/1/2016 was performed immediately before treatment and was repeated 42 minutes later after the patient’s first treatment for her low back and pelvis abnormalities and resulting pain. Her average hip muscle strength had increased 16.7% and the difference between her right and left side muscle strengths had reduced 22.4%. Her greatest strength improvement was 27.5% for her left quadriceps. Her left adductor strength reduced by 12.7%, which was attributed to the the pain  patient experienced by the patient while she performed this test.

The tests were repeated again on 6/29/2016 after the patient’s corrective care had stabilized and her pain was relieved. Her average hip muscle strength had increased from 16.7% to 23.27%, while the reduced difference between her right and left side muscle strength had not changed significantly. Her greatest strength improvement was 55% for her left quadriceps.

The muscle strength increases found in this study occurred from joint realignment, tissue healing and resultant pain elimination and not from exercise training.

Many Americans experience some sort of temporomandibular-related pain or even a temporomandibular disorder (TMD). The National Institute of Dental and Craniofacial Research (NIDCR) estimates that 10 million Americans have a TMD, which is often referred to by non-medical professionals as “I have TMJ” or “I have a TMJ problem.” About 2/3 of Americans may experience one or more symptoms of a TMD/TMJ problem. Dr. Groover of Boulder’s premier chiropractic clinic is here to explain how chiropractic care is a practical treatment option for this common yet painful and lingering condition. 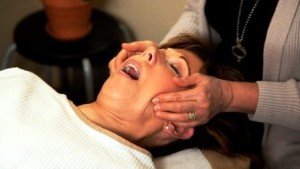 Dr. Groover’s sequential approach to TMD is diagnosing and treating the joint mechanical problems causing the neurological problems which result in muscular problems.

Dr. Groover’s comprehensive chiropractic care for your TMJ eases pain by correcting directly your TMJ misalignments, but doing so after some careful preparation. Your chewing muscles receive their nerve supply from what’s called the trigeminal nerve. This is a cranial nerve originating at the base of your head, which is sensitive to misalignment at the upper cervical region where your head joins your neck. Diagnosis and treatment of this misalignment comes first. The alignment and stability of your pelvis, low back, upper back, ribs and lower neck comes next, followed by your shoulders. Ideally every joint in your body should be aligned and stable to remove all causes and complications for TMJ dysfunction.

Dr. Groover explains misalignment of the jaw that results from improper posture or a back problem can cause your TMJ disorder. Misalignment of your upper cervical spine causes high and low hips, shifting of your pelvis and upper back away from your center of gravity, poor weight balance between your right and left standing body weight and unequal leg lengths. Upper cervical correction eliminates these postural distortions.

An approach to treating TMJ caused by misalignment in your neck and upper back is to perform adjustments on your spinal joints in these areas. In addition, trigger point therapy is used to relieve tight muscles in the back around your spine. This reduces the amount of stress put on your jaw so other treatments to adjust the jaw will be more effective. When these treatments are employed, the motion of your jaw joint improves and symptoms like ear pain, jaw locking, headaches and neck pain are reduced, the doctor continued.

Dr. Groover recommends that patients suffering from TMJ problems should avoid the following:

If you’d like to be seen for a comprehensive TMJ consultation, please review Dr. Groover’s Boulder chiropractic clinic online or give us a call at (303) 442-7772. We’re happy to assist and offer x-rays and more to make the process easier and more seamless for you.

It’s not unusual for Dr. Groover of Boulder’s Groover Chiropractic Clinic to hear a patient’s long list of symptoms. New patients usually come to Dr. Groover with their primary complaint and a long and diverse list of symptoms and abnormalities, each with their own etiology (the cause, set of causes, or manner of causation) and complication (secondary disease or condition aggravating an already existing one). 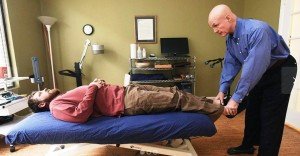 This requires a well-studied, individualized approach to diagnosis and treatment to achieve clinical success, which is Dr. Groover’s passion and specialty. Here are some example scenarios:

Do you have neck pain? Is it chronic from no apparent specific cause, or the acute effect from a specific recent injury? Has your neck, without you knowing it, degenerated over time into arthritis? Have the ligaments in your neck been recently injured? What role does upper cervical (base of your head and upper two neck vertebra) misalignment play, what role does postural distortion play? What about your shoulders, ribs and upper back? What about the structure and function of your pelvis? Your knees and ankles? Where do we start? To what extent will specialized upper cervical specific chiropractic diagnosis and treatment be needed?

Do you suffer from migraine headache? Is it coming from your head, your neck or your body chemistry? How can we find out so we know where to begin, what other priorities to consider and what expected results will be? What types of migraine relief can we offer?

Do you need help with sleeplessness and fatigue? Is your sleep disturbed by pain, and can the problem be solved by alleviating your pain? Do you have misalignments of your upper cervical spine and pelvis impairing your parasympathetic nervous system and stimulation driving your sympathetic nervous system into “fight or flight,” upsetting your feelings of safety and security, relaxation in body and mind and your ability to sink into deep restorative rest? How much do your diet, nutrition and lifestyle habits contribute to your sleeplessness?

Have you been in a car accident? Are you aware of the immense forces which pass through your body even during “low impact” car crashes? Did you know that car crashes usually cause wide-spread, whole-body injuries, including underlying structural and functional abnormalities which manifest as symptoms weeks, months or even years later? Do you know that car crashes frequently cause life-impairing neck ligament traumas, the location and severity of which are only detected through specialized diagnostic testing?

Dr. Groover offers free global screening consultations and his staff is happy to answer any questions you may have. For more information, please visit his Boulder chiropractic clinic online or give them a call at (303) 442-7772.

For Dr. Groover of Groover Chiropractic Clinic, it’s not about just treating your symptoms; it’s about getting to the root of what’s causing your pain, discomfort and ill-health. Here’s what you can expect to discuss upon your first visit to the Boulder chiropractic clinic: 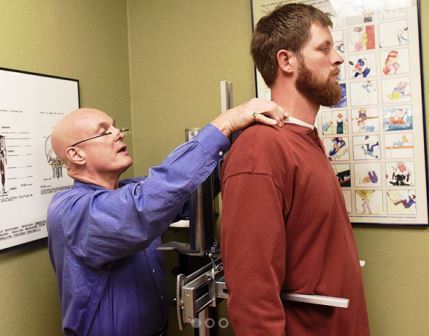 Dr. Groover’s ultimate goal in treating any patient is to restore structure and functionality of the spine and extremity joints first as the basis for successful, immediate symptoms of relief and cumulative attainment of their higher health, wellness and life goals.

Dr. Groover offers free global screening consultations and his staff is happy to answer any questions you may have. For more information, please visit his Boulder chiropractic clinic online or give them a call at (303) 442-7772.